Unknown to most bibliographers

8vo. VII, (1), 126 pp., final blank f. With lithogr. map at the end of the volume; printed notes of a Bedouin melody within the text. Contemporary green half calf with giltstamped spine title and marbled sides, original printed yellow wrappers bound within with wood-engraved desert illustration on back cover.

Extremely rare account of Wallin's principal journey through Arabia, unknown to most bibliographers: "It was not until two years after his death", writes Henze, "that the report of his first (and most important) journey (performed in 1845, a year before the appearance of the first volume of Carl Ritter's 'Arabia') was published". This refers to the English "Narrative of a Journey from Cairo to Medina and Mecca", which was printed in the Journal of the Royal Geographical Society in 1854. In fact, an extensive account of the first leg of this highly significant journey was first given to the world in December 1853, but little more than a year after the author's passing. Of this Swedish-language book, edited by Berndt Otto Schauman, less than two dozen copies are known worldwide, 12 of which are in Finnish libraries (the remainder distributed throughout Sweden [4 copies], Germany [2 copies], Denmark, France, and the U.S.A. [a single copy each]). In contrast with the later JRGS publication, the present work includes an appendix rendering Arabic terms and phrases that occur throughout the text in the original language and script. 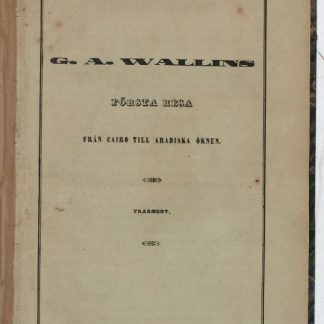