[Slave Trade]. Class B. Correspondence with British Ministers and Agents in Foreign Countries, and with Foreign Ministers in England, relating to the Slave Trade. From April 1, 1859, to March 31, 1860.

British papers and correspondence with local agents on the international slave trade, including missives exchanged between Mr. Doria, Mr. C. Wood, and Sir G. Clerk on the continued importation of slaves by the Sheikh of Bandar Lengeh, discussing steps of "signal reprehension" (p. 85) against such conduct, and further intelligence forwarded by Captain Jones from Bushire relative to the trade of slaves throughout the Arabian Gulf. 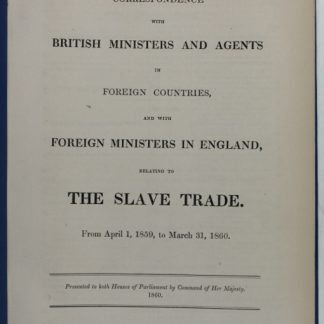