London, printed for Her Majesty's Stationery Office, by Harrison and Sons, 1888.

Rare British parliamentary papers and correspondence with local agents and officers on the slave trade, including reports of naval battles with dhows (often flying false French colours) between the east coast of Africa and Jeddah, as well as a report on British activity in the Arabian Gulf which halted the slave trade on the northern shore of the Peninsula: "the strict blockade which has been established on the Arabian coast during the past two seasons has to a great extent stopped the transport of cargoes of slaves in large numbers from Africa to the Arabian coast and the Persian Gulf" (p. 3). 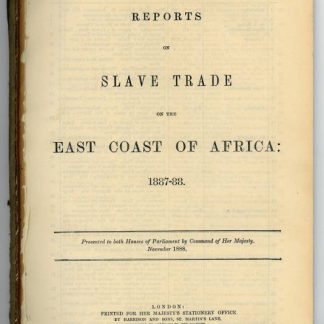