Arabs of the Gulf involved in slavery

[Slave Trade]. Report addressed to the Earl of Clarendon by the Committee on the East African Slave Trade, dated January 24, 1870. Presented to both Houses of Parliament by command of Her Majesty. 1870. [C.-209].

Rare British parliamentary papers and correspondence with local agents on the slave trade, including accounts of the extent to which many Arabs of the Gulf involved themselves in slavery: "The illegal trade, which is in the hand chiefly of the Northern Arabs, is carried on in the following manner: The Arabs generally arrive at Zanzibar with the north-east monsoon in the early part of the year; their object being to purchase, if they can, and, if not, to kidnap, the slaves they may require, and to export them for sale to Arabia and the shores of the Red Sea and Persian Gulf [...]" (p. 2f.). The map shows the east coast of Africa from Madagascar to the Arabian Peninsula, including the Arabian Gulf and the southern shore of Persia. Disbound from volume of parliamentary papers, a good copy. 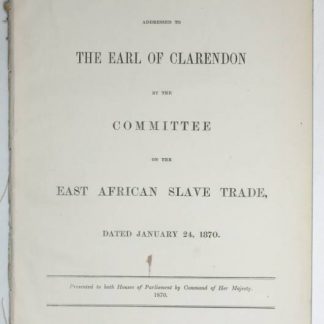