Rycaut, Paul. The History of the Turkish Empire from the year 1623 to the year 1677. Containing the reigns of the last three emperours, viz. Sultan Morat or Amurat IV. Sultan Ibrahim, and Sultan Mahomet IV his Son, the XIII. emperour now reigning.

First edition. "[D]edicated to the king. This was a continuation of Knolles's 'Turkish History', to the sixth edition of which (3 vols. 1687-1700) it was printed as a supplement. The whole work was abridged, with some addenda by Savage", in 1701" (DNB 50, p. 39). Sir Paul Rycaut (1629-1700) was first employed as private secretary to the British ambassador to Constantinople and later became British Consul and factor at Smyrna.

The portraits show the author and the Ottoman Sultans Murad IV, Ibrahim, Mehmed IV. as well as a splendidly decorated ornate palm, as high as a mast - a gift for the circumcision of the Prince. 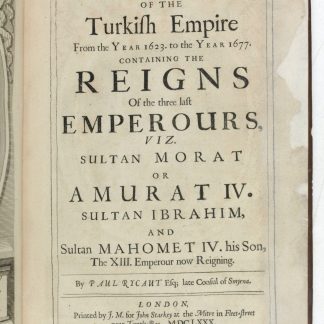