[Slave Trade]. Slave Trade. No. 1 (1883). Correspondence with British representatives and agents abroad, and reports from Naval Officers and the Treasury, relative to the Slave Trade: 1882-83. Presented to both Houses of Parliament by command of Her Majesty. 1883. [C.-3547].

Rare British parliamentary papers and correspondence with local agents and officers on the slave trade. Includes the official admiralty report on the murder of Captain Charles J. Brownrigg, who had tried to board a slaving dhow off Zanzibar, in 1881, but had encountered unexpected resistance from the Arab crew and was killed in the ensuing battle (p. 188f.). The relevant sections are headed: "Persia" (p. 23); "Turkey. (Consular)-Jeddah" (p. 77); "Zanzibar" (pp. 85-186; much of the correspondence is from/to Lieut.-Colonel S. B. Miles, then Her Majesty's Acting Agent and Consul-General at Zanzibar); and "Zanzibar. (Admiralty Reports)" (pp. 186-197). Slight edge chipping to first 2 or 3 leaves; a good copy. 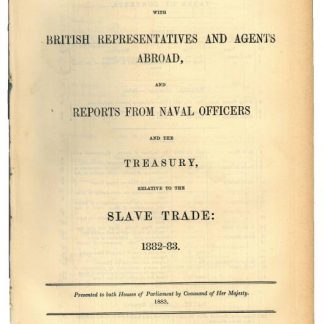