[Slave Trade]. Slave Trade. No. 3 (1878). Correspondence with British representatives and agents abroad, and reports from Naval Officers, relating to the Slave Trade. Presented to both Houses of Parliament by command of Her Majesty. 1878. [C.-2139].

Rare British parliamentary papers and correspondence with local agents and officers on the slave trade, including extensive material relating to the traffic in the Red Sea and the Gulf of Aden, a case of slave importation at Bandar Abbas; the question of suppression of slavery by Hajj pilgrims returning from Mecca and how the Ottoman government intends to counteract the same; the case of a dhow under French colours engaged in slave trade at Muscat, and concerning the release of a slave brought to Muscat by a French vessel, as well as a report to the effect that, "as regards the proceedings of Her Majesty's ships in the Persian Gulf, [...] affairs were generally quiet in thatr neighborhood" (p. 431). 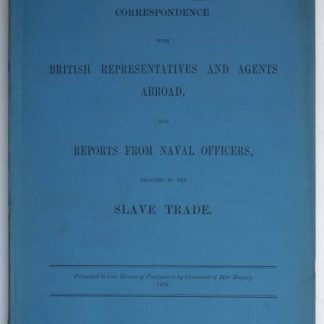