London, printed for Her Majesty's Stationery Office, by Harrison and Sons, 1900.

Rare British parliamentary papers and correspondence with local agents and officers on the slave trade mainly in Zanzibar and on the liberation of several slaves, as well as reports of fugitive slaves having claimed protection from British vessels in the Arabian Gulf (Bandar Abbas, Bandar Lengeh) and off Muscat. 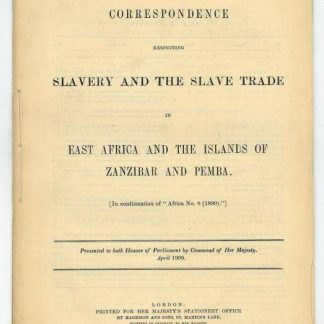