Unrecorded in the standard bibliographies and without counterpart in western libraries, this unique, large-scale view of Cairo reflects the economic and cultural effervescence of the second-largest city in the Empire: under Ottoman rule since 1517 and having expanded south and west from its nucleus around the Citadel, Cairo in the latter half of the 17th century was second only to Constantinople. The Ottoman influence may be discerned in the people's clothing in the foreground as well as in the city's architecture. On the river Nile, the map depicts numerous trade boats and sailors. To the left are soldiers battling as part of a tournament; on the right are the Sphinx (wearing a necklace!) and the famous pyramids of Giza: those of Khufu, Khafre, and Menkaure, as well as the smaller pyramids. The centre of the city shows numerous mosques and gardens. The letterpress text pasted under the engraving provides mostly historical and geographical information (in Italian and Latin).

Longhi's panorama seems to draw various aspects from previous works to create its own original representation of the Egyptian city. Indeed, it bears some resemblance to Braun and Hogenberg's 1572 "Cairos, quae olim Babylon, Aegypti maxima urbs", published in their famous "Civitates orbis terrarum". There are also similarities with Donato Bertelli's "La gran città del Cairo" (Venice 1575), as well as with the map of "Le Grand Caire" produced by the French soldier and traveller Henri de Beauveau (published in his "Relation journaliere du voyage du Levant", Nancy 1615). Ultimately, these plans probably all derive from a 1549 woodcut panorama credited to Matteo Pagano (or a Venetian engraving derived from it), as they all depict the city from the same viewpoint and on a similar scale. Longhi's map even takes up some of the ornaments of the Braun/Hogenberg map, such as the two people riding on a horse and a donkey in the foreground, though the antiquities as well as the numerous irrigation wheels are here shown in much greater detail. 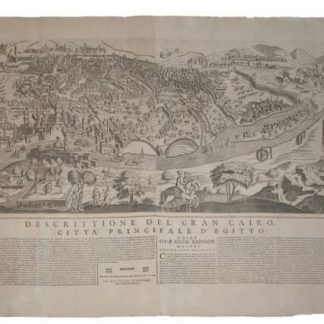