First edition of the "Natural history" edited by Johannes Caesarius (1468-1550), a humanist and close friend of Erasmus. The original text was by Gaius Plinius Secundus (AD 23 - August 25, AD 79), better known as Pliny the Elder. He was a Roman author, naturalist, and natural philosopher, as well as naval and army commander of the early Roman Empire, and personal friend of the emperor Vespasian. The text in the present edition is decorated with woodcut borders and many woodcut initials.

The "Naturalis Historia" is one of the largest single works to have survived from the Roman empire to the modern day and purports to cover the entire field of ancient knowledge, based on the best authorities available to Pliny. He claims to be the only Roman ever to have undertaken such a work. It comprised 37 books in 10 volumes and covered over 20,000 facts on topics including the fields of botany, zoology, astronomy , geology and mineralogy as well as the exploitation of those resources. It remains a standard work for the Roman period and the advances in technology and understanding of natural phenomena at the time. Some technical advances he discusses are the only sources for those inventions, such as hushing in mining technology or the use of water mills for crushing or grinding corn. Much of what he wrote about has been confirmed by archaeology. ''We know from Pliny that there were important pearl fisheries in the Gulf [...] Pliny identifies Tylos (Bahrain) as a place famous for its pearls [... He] attests that pearls were the most highly rated valuable in Roman society, and that those from the Gulf were specially praised [...] The pearl related finds at the site of El-Dur indicate the site was integrated into the maritime trade routes linking the Roman Empire, the Persian Empire, India and South Arabia'' (Carter). Book 6 holds a chapter that gives the first detailed account of the regions around the Gulf, including what are now Qatar, the Emirates and Oman.

With manuscript notes of multiple owners on pastedown (including written ex-libris by Antonii Mauritii Seguin 1713 and Mathon de la cour 1744). Some underling in text, and notes in the margins (partly lost due to trimmed edges). A very good copy with bookplate of De Ponsainpierre on pastedown. 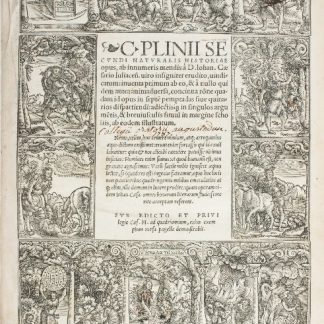