Signed in both English and Arabic

To Colonel Montgomery, referencing the success of the "Arabian Nights": "[...] To my great astonishment The Nights has hit the public taste: it has of later years been so stuffed with goody-goody, namby-pamby Maria-Matilda that it wants 'strong meat' and by Jove it has got it. We had the pleasure of seeing my good friend Thayer here and I (unhappily) forgot to put his name down for the Athenaeum Club - London without a club is like a park without games. We are both living well under influence of beef and port (wine) and shudder at the lean flesh pots of Trieste (veal) [...]".

Burton published his famous translation of the "Arabian Nights" ("The Book of the Thousand Nights and a Night") in a private printing for the Kama Shashtra Society in 1885. The private publication, by subscription only, was necessary to avoid Victorian obscenity strictures.

Reinforcement at fold, a little smudging to signatures. 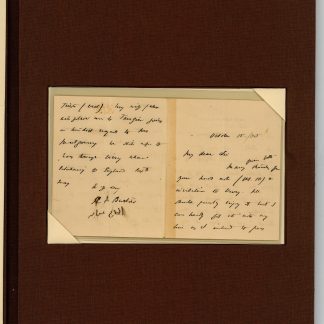