Important Latin edition of this Arabic medical compendium (first printed, also in Latin, in 1479), with additions by Gerard de Cremona. It provides a collection of opinions voiced by Greek and Arabic physicians on pathology and therapeutics. "No Arabic printed edition exists so far" (cf. Choulant). The third-century doctor Yahya bin Sarabiyun, son of a Bagarma physician, wrote his great medical work "Al-Kunnas" in Syriac, but it was soon translated into Arabic by scholars such as Musa Ibrahim al-Haditi and ibn Bahlul. There exist manuscripts in twelve and in seven books. "The seven-book edition was frequently printed in Latin translations as 'Breviarium' and 'Practica therapeuticae methodus'. Albanus Torinus, the editor of the Basel 1543 edition, called him Janus Damascenus, for which reason he has been confused with the well-known theologian of that name. He is also often mistaken for his younger namesake, Serapio junior" (cf. GAL I, 233). Some catalogues even ascribe this work to the Baghdad physician Abu-Zakariya Yuanna Ibn-Masawaih.

Slight waterstaining; some unobtrusive worming to upper cover and flyleaves. Binding rubbed; extremeties bumped with chipping to spine-ends. A wide-margined copy. Provenance: 1677 ownership of the pharmacist and medical student Joseph Franz König on front pastedown; later in the library of Bonifacius Brix von Wahlberg, court physician to the Princes of Fürstenberg, in the later 18th century (his ownership on the title page). 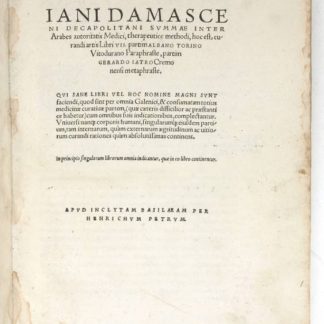