First edition of Grimm's principal work. "[Jacob Grimm] created, almost out of nothing, the scientific study of German and Germanic mythology, philology, poetry and law, mostly in the years 1806-29 when [he] was a badly paid library-assistant in Cassel. His 'German Grammar' is in fact a 'Germanic Grammar', tracing the development of this branch of the Indo-European language family [... Grimm] explained the differences of the Germanic languages from their sister tongues and within themselves by showing the determinable regularity of hitherto unnoticed or inexplicable phenomena such as the gradation and modification of vowels" (PMM).

This set does not include the volumes 3 and 4, which were not published until 1837. Front inner hinge of vol. 2 reinforced at rebinding. Stored in a magnificent giltstamped green half calf portofolio by Jacques P. Desmonts of Norwalk, Connecticut. The native Frenchman Desmonts, born in Bernay in 1938, was long the owner of the renowned New York bookbinding shop James Macdonald. In 1978 he moved the famous establishment to Norwalk, where he passed away in 2008. 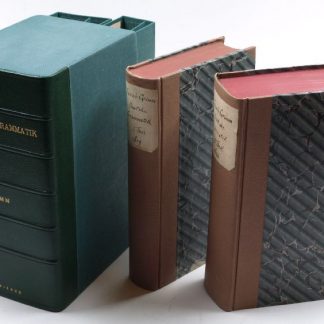