The Jesuit mission to China

Second edition of Leibniz's collection of texts relating to the Jesuit mission to China, the recent treaty between China and Russia, and the remarkable flowering of scientific culture at Beijing under the Manchu emperor K'ang-hsi (d. 1721). In his preface, Leibniz writes: "I consider it a singular plan of the fates that human cultivation and refinement should today be concentrated, as it were, in the two extremes of our continent, in Europe and in Tschina (as they call it), which adorns the Orient as Europe does the opposite edge of the earth." Leibniz had become interested in China after a meeting with the Jesuit missionary Claudio Filippo Grimaldi, who had been appointed mathematician to the court of Beijing. Grimaldi and Leibniz corresponded, and a letter from Grimaldi, addressed from Goa, is reproduced in the work. Leibniz also includes an extract in Latin from Ferdinand Verbiest's "Astronomia Europea sub Imperatore Tartaro Sinico Cam Hy". Verbiest had been entirely responsible for the reintroduction of Western astronomy to China. First published in 1697, this second edition has an additional appreciation for the Emperor by the Jesuit Joachim Bouvet appended which is lacking in the Wolfenbüttel and Berlin copies.

Some minor spotting and browning throughout. Leibniz’s name supplied in neat ink manuscript after initials on title; early notations on front free endpaper; an underlining in red ink. The name of the author of the second part is written on the second title in an early hand. Provenance: G. M and J. H. Farrell (bookplate); Sydney Ross (bookplate); latterly in the library of Jean R. Perrette (bookplate). Extremely rare: no copy of the Lyons first edition has appeared on the market, and this second edition only once. 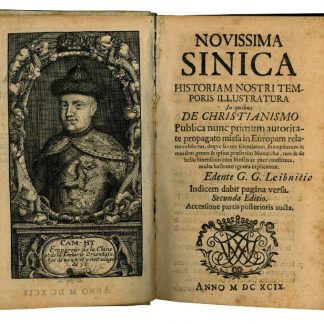