A scribe in oriental costume, seated on a carpet with a large removable Qur'an on a bookrest.

Recognised for his great attention to detail and use of wonderfully vibrant colours, works from Bergman’s foundry are highly prized today by collectors worldwide. F. X. Bergman was the son of a Bohemian metalwork chaser and finisher who had moved to Vienna in 1860, there founding a small bronze factory. At the turn of the century, his son Franz Xaver inherited the company and opened a new foundry, basing many of his early bronzes on designs from his father’s workshop and producing an eclectic mix of oriental, erotic and animal figure bronzes. Bergman used a cold painted technique, whereby cast bronzes were decorated in several layers of polychrome ‘dust paint.’ These layers were not fired to fix them to the bronzes, hence they are ‘cold painted’. 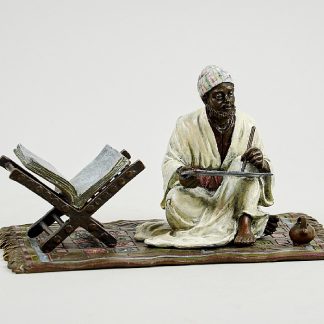