Rare anthropological publication, with original photographic documentation, of the inhabitants of the Fergana region in the extreme east of Uzbekistan, near Kyrgyzstan and Tajikistan.

Born in Transylvania, Károly Jenö (Charles Eugene) Ujfalvy de Mezokövesd (1842-1904) was a noted Austro-Hungarian ethographic researcher and linguist of Central Asia and the Himalayas. He settled in France, where he was trained by the noted anthropologist Paul Broca, and taught Asian history and geography at the School of Oriental Languages. The Ministry of Education sent him on a mission to Russia, Siberia, Turkestan and Uzbekistan in 1876, on which journeys he recorded these images of locals in the region. (Ujfalvy would also travel to Samarkand and Bokhara and lead an expedition to the Kashmir in 1880.) This is the fourth of a total of six volumes concerning the French expedition to Central Asia. In his preface, Ujfalvy develops the aims of his enterprise and outlines the principles by which one may obtain anthropologically useful portraits: subjects are to be photographed in the nude, from the front and in profile, against a white background and using a light metre. The individuals, whose portraits measure exactly one-eighth of their natural size, are identified by name, race, sex, height, and age, as well as by the colour of the skin, the hair, and the eyes. The photographs were realised with the aid of one photographer "Kazlowski, le plus habile de Tachkend"; the present album likely constitutes his only published work. 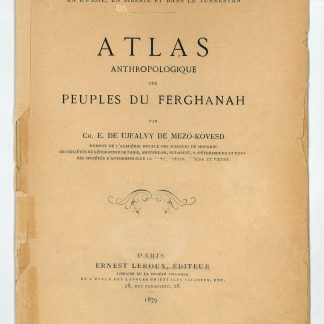