The Sheikhs of the Gulf

[East India-Company]. The Law, Relating to India, and the East-India Company; With Notes and an Appendix.

The most comprehensive and relevant edition of "a work which may almost be regarded as the standard one on the subject to which it is devoted" (Preface), i.e., the legal code in force within the provinces ruled by the British East India Company - a rule which would last until 1858, when, following the Indian Rebellion of 1857, the British Crown would assume direct control. Numerous statutes concern the slave trade in the Arabian Gulf or regulate relationships with the local Arab Sheikhdoms, such as 12 & 13 Victoriae, Cap. LXXXIV: "An Act for carrying into effect Engagements between her Majesty and certain Arabian Chiefs in the Persian Gulf", citing the chiefs "Sultan Bin Sugger, Shaik of Ras-el-Khyma and Shargah in the Persian Gulf, the chief of the Joasmee Arabs", "Muktoom Bin Buttye, Shaik of Debaye", "Abdool Azeez Bin Rashid, Shaik of Eginan", "Shaik Abdullah Bin Rashid, Shaik of Amulgavine", and "Saeed Bin Tahnoon, Shaik of the Beni Yas, chief of Aboothabee", as well as "Shaik Mahomed Bin Khuleefa Bin Subman, chief of Bahrein", and the engagements they concluded with the British crown (pp. 414ff.). Other acts relate to engagements with "Syed Syf bin Hamood, the Chief of Sohar, in Arabia" (p. 437), with Seid Saeed bin Sultan, the Imaum of Muscat (pp. 220, 383), etc.

Very well preserved, in a modern binding in contemporary style. 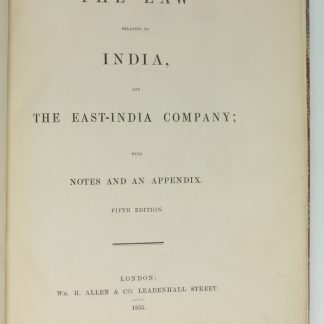