First American printing. The first volume of Karl Marx's groundbreaking work was published in German in 1867 with a second edition in 1873. The author died before the third edition could be issued with Engels stepping in to bring it to completion in 1883 using Marx's notes for his extensive revisions for the earlier first French edition. Engels compiled and edited Volumes II and III from Marx's papers and these appeared in 1885 and 1894. In this period Engels was also able to oversee this translation of the first part, its first appearance in the English language. The translation was carried out by Moore, well connected in British socialist circles, he translated the Communist Manifesto a year later under Engels editorship. He was ably assisted by Aveling - the partner of Eleanor Marx, the youngest daughter of the author, who was also enlisted to check the quotations used in the work. The first edition with an American imprint appeared in 1889, published by Appleton though it was printed at Aberdeen University Press from Swan Sonnenschein's first edition, itself printed in Perth, so this particular edition is the first to have been printed in the US. Interestingly, Engels in his preface writes of Marx intending for there to be an American edition in his lifetime, but that nothing came of it "for want of a fit and proper translator".

A couple of chips and neat repair to the front endpaper, very good. 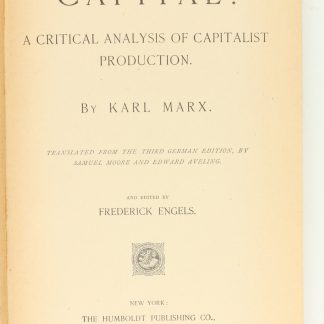