An important letter on the construction of an overland telegraph line through Africa, to the telegraphic engineer Samuel Canning (1823-1908), a pioneer in submarine telegraphy. Writing while serving as governor-general of the Sudan and engaged in the suppressing of the slave trade and the improvement of communications in the region, Gordon acknowledges the receipt of a letter from Canning on the construction of an overland telegraph line through Africa, and a Royal Geographical Society pamphlet on the same subject: "You ask me if I would recommend to the Egyptian Government, a convention, with a Company, on the basis of the terms alluded to by Mr. Geigler (and Geigler Pasha). I presume you want my outspoken opinion [...] A Company for any such work requires some certain advantages. They do not enter into a scheme like this for love of the Negro or for exploration purposes. Therefore, let me ask you, do you think, even if Egypt made the line up to Uganda, from the north, could the Company make the line up to Uganda, from the south. Even if you did make the line, are you sure of keeping it safe, except with an armed force [...] I doubt entirely, in spite of all the explorers have written, that you could do either one or the other without an armed force. The explorers say this king will do this or that, but they have only the words to go on [...] I am to recommend to the Egyptian Govt. with respect to the extension of the Egyptian line, to Uganda. I would support this extension on the terms which Geigler Pasha has mentioned [...] I should wish to see a lot of penal clauses put in which might bring in the Egyptian Govt. the reproaches of the Counsel General [...] I would prefer the following scheme, which would not compromise Egypt: 1. that the Company should take all receipts for a term of - years, from Khartoum southward, and vice-versa, allowing the Egyptian officials [...] to telegraph free, from stations in Egyptian territory. 2. that the Egyptian Govt. should supply half the cost of labour [...] By this means, Egypt would avoid any chance of interference, by the Company, of by the Counsel General [...] There is no doubt that if the line from the South up to Uganda is not made, then the line from Khartoum to Uganda could be of no use [...]". 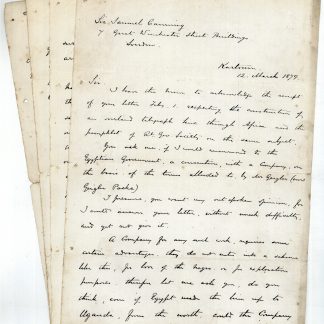