Forgotten hero of a forgotten war

Poignant personal archive of condolence letters on the occasion of the sudden death of Royal Army Lieutenant David Arthur Wootton whilst serving in the Suez Canal Zone, to his father, Arthur Henry Wootton. The authors, David Wootton's army colleagues, his superiors, and a family friend, praise his character, give the details of his illness, naming liver failure caused by infectious hepatitis as cause of death, inform him of the upcoming funeral at the Fayed British Military Cemetery and the location of his grave, and announce the possible erection of an expense paid headstone at his gravesite.

3 handwritten letters by Major Cronin-Coltsmann, Wootton's commanding officer, expressing his own grief ("I shall miss his companionship both on and off duty more than words can express [...]"), giving the timeline of David's illness and describing his funeral, offering to send the photographs he took there to his parents, and bringing up the forwarding of David's personal effects.

Includes a letter from a physician at the Fayed Hospital to another physician in England, discussing Wootton's case and mentioning a shortage of doctors in Fayed at the time of the imminent hepatitis endemic.

Completing the set are a telegram informing Mr. and Mrs. Wootton that their son was placed on the "dangerously ill" list, David's birth and death certificates, the latter granting the deceased's estate to his father, as well as Arthur Henry Wootton's baptism certificate and his warrant certificate, stating that he served with the Territorial Force from 1916.

David Wootton's name is memorialized on the Roll of Honour for all British and Commonwealth personnel who lost their lives whilst serving in the Suez Canal Zone of Egypt during the 1951-54 "Emergency". 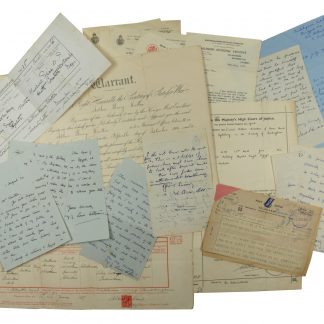