London, John Dicks at the Office of Reynold's Miscellany, [1849].

The first year of "Reynolds's Political Instructor", the leading newspaper of the post-Chartist era. Each issue included a signed editorial by Reynolds, featuring "radical commentaries on the week's events" (Brake/Demoor). Essentially a Chartist periodical, the "Instructor" argued for "the Charter and Something More", advocating universal suffrage and the rights of the working class. The paper "was part of the culture of radical internationalism, supporting revolutionary and liberal movements in Europe, and as such was also published in Paris by the Galignani brothers" (ibid.). Each issue features woodcut portraits of important political activists, among them Giuseppe Mazzini (1805-72), Julian Harney (1817-97) and John Mitchel (1815-75). Launched in 1849, the periodical became "Reynolds's Weekly Newspaper" in May 1850, ceasing publication in 1967 as the "Sunday Citizen". The present series omits only nos. 8 and 11.

Brake/Demoor, Dictionary of Nineteenth-Century Journalism in Great Britain and Ireland 540. 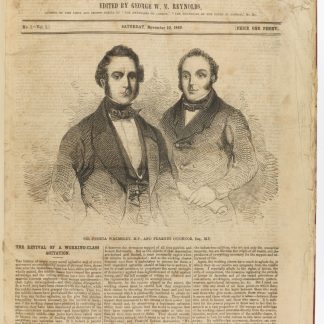