Most beautiful and influential (but also censored) edition of 13th-century stories, including several borrowed and reworked by Boccaccio in his Decameron

4to (215 x 160 mm). (26), (2 blank), "153" (= 165), (3) pp. With the Giunta's woodcut fleur-de-lis device in a decorative cartouche on the title-page and a different one in an oval on the last page, a woodcut factotum at the head of the title-page, another woodcut decoration, about 120 woodcut decorated initials (about 7 series) including some repeats, decorations built up from arabesque typographic ornaments, and a vine-leaf ornament (Vervliet 90). With the main text set in roman type but the extensive preliminaries in italic. Contemporary limp sheepskin parchment, straight-sewn on 3 tanned calf supports cut flush with the bookblock, the spine reinforced with printed waste.

Third edition (usually called the second), in the original Italian, of the first collection of native Italian stories, best known under the titles Il novellino and Le cento novelle antiche, written up as a collection (at least in some cases probably copied or adapted from various sources) between 1281 and 1300. Boccaccio borrowed and adapted eight of them when he wrote his Decameron between 1348 and 1353. Seven manuscripts survive from the early 1300s to 1523, but most contain fewer than 50 stories and only the last, commissioned by Pietro Bembo, contains 100. The stories are among the first to present ordinary people as protagonists in stories of everyday life. They are as bawdy as Boccaccio's but more conservative in their presentation of relations between the sexes, with women often though not always depicted as foolish and stupid (and once described as smelling like rotten fish), but women occasionally appear in a better light and are even allowed to be risqué, at least in private among themselves.

But while some stories from the Decameron were printed already in 1470 and it remained a celebrated literary standard work to our day, the present stories appear not to have been printed until 1525, when Carlo Gualteruzzi prepared an edition directly or indirectly from the 1523 manuscript: Le ciento novelle antike, Bologna, Girolamo Benedetti, 1525 (USTC 800597). An undated edition (USTC 802199 & 994562) reports no publisher or place of publication, but probably appeared in Italy soon after the 1525 edition. Both were simple productions of popular literature that were soon largely forgotten and survive in only a handful of copies. Entries in the surviving Diario of the printing office of the monastery of San Jacopo di Ripoli in Florence record their production of "il cento novelle" from 20 April 1482 to 13 May 1483, but this is now identified as a surviving edition of the Decameron rather than a lost edition of Le cento novelle antiche.

So when the Benedictine monk Vincenzo Borghini (1515-1580), advisor to the Medici in Florence, prepared the present 1572 edition, these stories had already become almost unattainable. It is a much fancier production than the earlier editions, beautifully printed on good paper in some of the best French types of the day (notably romans by Pierre Haultin and italics by Robert Granjon) with a wide variety of decorated initial letters, other woodcut decorations and arabesque typographic ornaments. It quickly became the standard text and all editions followed it until 1825, when scholars returned to the text of the first edition. So the present edition shows the stories as they were known for nearly 250 years.

But in the heat of the Counter-Reformation, with the Catholic Church fiercely guarding its reputation against accusations of corruption and immorality, these stories could not be printed as they stood. The Church was mainly concerned about stories that might show the Church or its representatives in a negative light, so Borghini's censorship centred on religious elements, but there were also limits to his toleration of erotic scenes. He removed 17 stories entirely (6, 7, 12, 16-18, 36-37, 39, 54, 57, 62, 75, 86-87, 91 and 93), replacing them with 18 stories whose sources still need to be investigated. One of the added stories appears before story 1 as "Proemio", so the others are still numbered I-C. Finally Borghini added an appendix with four additional stories, numbered as a separate series, I-IIII. While modern scholars understandably lament Borghini's censorship, it has unfortunately led them to ignore the 22 stories he added, while a recent study of his work on the Decameron published a year later shows that besides censoring it he gave it much scholarly care and consulted early manuscripts. A proper understanding of this important series of stories (and their reception) requires a thorough study of the manuscripts and both the 1525 and the present 1572 editions.

With a 17th-century(?) armorial library stamp on the title-page ("ex. bibliot: come ... cardelli. kom"?). After an attempt to remove an inscription from the foot of the title-page (leaving a stain on the facing flyleaf) an owner cut off 1 cm of its foot margin, not approaching the text. With a tear in the blank leaf 3*6 and in the blank foot of the final leaf V8, and minor foxing, but still in good condition. The cover has pulled loose from the bookblock at the inside front hinge. The most beautiful and most influential edition of an important series of 13th-century stories, with 17 stories from the first edition omitted and others censored, but with 22 stories added. 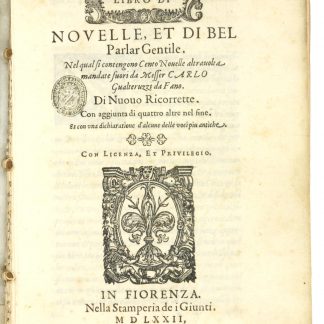