Pioneering book of about 300 medicinal recipes in Spanish

4to. (7), "335" [= 332], (6) ff. With a helmed, crested and mantled dedication woodcut of the Contreras coat of arms on the title-page (dexter argent paly of 3 azure, sinister an inverted tower, the whole with a bordure containing 12 X's) repeated at the end of liber I, woodcut device at the end of the text (stork standing on its left foot on a scull and holding a rock in its right foot, holding a banderole in its beak with the word "vigilate"), and a woodcut annunciation (including a banderole with "ave Maria gracia plena") above the colophon, a woodcut tailpiece (plus 5 repeats), and headpieces, tailpieces and factotums built up from arabesque and other typographic ornaments.Tree-pattern tanned sheepskin (ca. 1830), sewn on 3 recessed cords but with 4 false bands on the gold-tooled spine, with the title and author's name on a brown and a black morocco label in the 2nd and 4th of 5 compartments and the owner's initials J.S. (for José Saranderes) in the 5th, marbled endpapers (large blue shell on small brown shell, the form similar to Wolfe 125), headbands in blue and white.

Rare first and only early edition, with the text in Spanish but the lists of ingredients in Latin, of by far the most extensive and most detailed early medicinal recipe book in Spanish, with recipes for about 300 medicines arranged in 9 sections for internal medicines followed by 3 sections for external medicines. Each recipe begins with a list of ingredients followed by instructions for the preparation of the medicine and information about its uses and dosage under various circumstances. Liber 1, section V is devoted to opium. The book closes with an appendix on weights and measures and an extensive index. Its only real predecessor, Luis de Oviedo's 1581 Methodo de la coleccion, y reposicion de las medicinas, offers only 49 recipes and gives no clear lists of ingredients.

Almost all we know about Castillo comes from the book itself, where he gives some biographical information. He was born to Spanish parents in Bordeaux, where he studied pharmacology, then worked in the apothecary shop at the Escorial in Madrid where he learned a great deal about chemistry (a remarkably early example of experimental chemistry in pharmacology: López-Pérez, Chymia, 2010, p. 344) and moved about 1610 to Cádiz where he set up his own apothecary shop. He noticed the dangerous lack of good Latin among young people working for apothecaries and provided the present work to remedy the situation. He was still fairly young when he wrote it. On the title-page he calls himself a professor of medicine at Cadíz, but he probably taught on his own account, for there was no faculty of medicine in Cadíz until 1748. The colophon's "en cassa de l autor" suggests the publication was his own venture, without institutional support, and he dedicates it to Juan Ruiz de Contreras y Téllez (ca. 1570-1625), an important councillor to King Phillip III, though he lost some of his influence when the king died in 1621. Although Castillo titles his book Pharmacopoea, and it was widely used and influential in Spain, it appears never to have been officially adopted as a standard, so that it does not fit the strict modern definition of a pharmacopoeia. The content of the book is: liber 1 (internal): I De conditis aut conservis. II De sapis. III De eclegmatis seu loch. IV De pulveribus aromaticis electuariorum. V De opiatis. VI De electuaris. VII De hieris. VIII De pilulis. IX De trochiscis. liber 2 (external): prefacio. I De oleis. II De unguentis. III De emplastris. [Appendix:] Tractado de los pessos, y medidas vivales.

With an owner's inscription of the Madrid pharmacologist José Saranderes, author of a 1837 manuscript on the preparation of opium, on the back of the title-page and his initials J.S. gold-tooled at the foot of the spine. Slightly browned with some foxing, spots and stains, a hole affecting a couple words in Y2 and restored corners in 7 other leaves without loss of text, but still generally in good condition. Binding slightly rubbed but otherwise good. The earliest extensive book of medicinal recipes in Spanish: a pioneering pharmacological work. 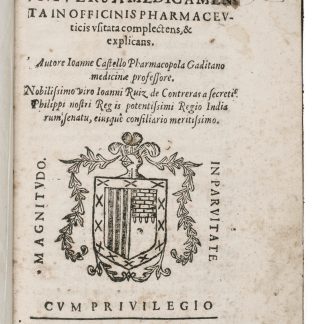