London, printed for the translator by J. Barfield, 1798.

Born in Switzerland, Warnery participated in more than a dozen campaigns, serving in Sardinia, Austria, and Russia between 1733 and 1745. He subsequently moved to Silesia and served with distinction as an officer in the Prussian Hussars until 1758. From 1766 onwards he was in Polish services as adjutant to Stanislaw August Poniatowski and military advisor to Prince Adam Kazimierz Czartoryski, becoming the very model of a modern major general around 1770: he was a prolific writer on military matters, offering commentaries on the campaigns of classical antiquity, polemical responses to the works of Folard, Guibert, Turpin, and Lloyd, an account of the Seven Years' War, and analyses of the Russian and Turkish armies. The present work is probably his best known.

This English translation was carried out by George Frederick Koehler, a highly talented artillery officer who served at the siege of Gibraltar, commanded the army of the Belgian Republic in 1790, and headed a military mission to Turkey during the Egyptian Campaign. The lively illustrations are based on Koehler's own "hasty sketches".

Plates rather spotty. From the collection of Thomas Fremantle, 3rd Baron Cottesloe (1862-1956), commander of the Territorial Army and president of the Society for Army History Research (purchased from Quaritch, 28 October 1901). 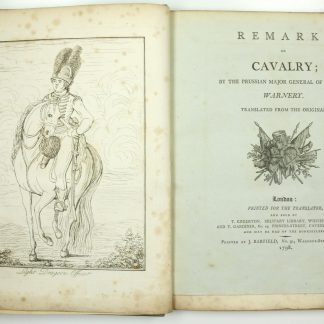