A classic of falconry

First edition, rare. A classic of falconry describing the training and care of hawks, by the renowned falconer Blaine, drawing on more than 40 years of experience in the field. When the book was reprinted in 1970, the publisher's blurb noted that the book was "extremely scarce and second-hand copies are making as much as eight guineas in the sales rooms".

Blaine, a longtime member of the Old Hawking Club, "was one of those legendary figures who seems to come along in falconry every so often, raising the standards of the sport as well as pushing the envelope of what can be accomplished" (Gallagher). His useful handbook provides an introduction to the sport, and includes a glossary of falconry terms as well as a short bibliography on the subject, mentioning an English edition of the famous Persian falconry treatise "Baz-Nama-Yi Nasiri".

The plates show a greenland falcon, a falcon eyass, a passage falcon, a falcon pluming a grouse, two eyass tiercels, a goshawk, and a team of passage hawks weathering. The smaller illustrations in the text display falconer's equipment, the beaks of falcons and hawks, and the technique of repairing damaged feathers.

Somewhat browned and brownstained throughout. A single copy in auction records. 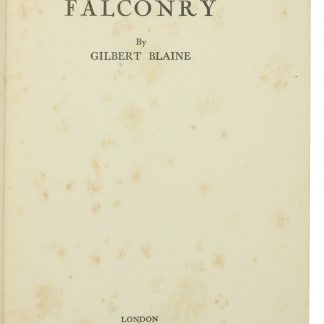