Rare British army regulations governing equipment and supplies, first issued in 1880 during the Second Anglo-Afghan War and here re-issued in 1883, in vastly expanded form, in spite of the fact that the British and Indian troops had effectively withdrawn from Afghanistan by 1881, leaving behind only British Indian agents to liaison between the governments. The orders were issued by Major General Sir G. R. Greaves (1831-1922) as Adjutant-General for India.

This copy with an ink annotation to the title-page and first leaf of text marking it for the use of "Section C, Simla". Corners worn; interior spotted, preliminaries dusty. Unrecorded in library catalogues: the Anne S. K. Brown Military Collection at Brown University's John Hay Library holds the 1880 issue, which comprises a mere 55 pages. 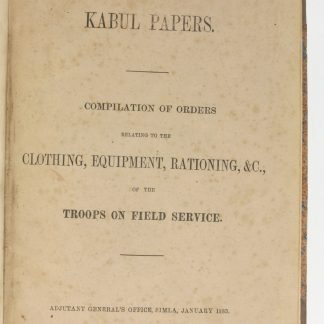