Dawson, Llewellyn Styles. Memoirs of Hydrography Including Brief Biographies of the Principal Officers Who Have Served in H.M. Naval Surveying Service between the Years 1750 and 1885. Vol. II: 1830 to 1885.

Published as a description of the careers of Royal Navy officers in the mid and latter part of the 19th century, this also constitutes an important source book for the activity of the UK forces in the Arabian Gulf during a crucial period of British activity in the region. Contains plentifold references to places along the Gulf coast, Bahrein and Mascat, discussing in particular the survey of the Gulf undertaken by Captain Haines (p. 38f.), Captain Ethersey & Commodore Charles deployment in the Gulf (pp. 54f.), work performed by captain Felix Jones (p. 88ff.), publications of maps by Lieut. Whitelock on the Gulf and Oman (p. 90), map making (p. 100), Marine surveys in the Gulf and mapping (pp. 109f.), list of charts made for the "Persian Gulf Pilot" (p. 128), survey of the reefs near Bahrein (p. 153), Lieut. Wish's map of Bahrein (p. 158) and map making (p. 195).

Extremeties slightly rubbed and bumped; binding a little loosened. Chapters 1 and 2 have photographic portraits mounted at the head of the page; the article of Admiral Sir Edward Belcher has a photographic reproduction of an oil portrait from the National Portrait Gallery loosely inserted. Numerous handwritten annotations. From the library of J. A. Edgell, 1940s editor of the "Persian Gulf Pilot", with his bookplate to pastedown and handwritten ownership to flyleaf; also with bookplate of Allan Carruthers of Abergavenny, Monmouthshire. 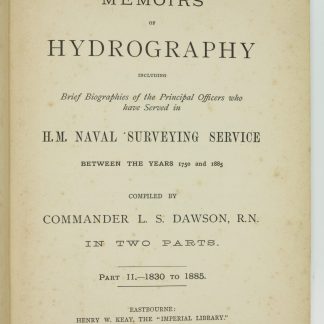