The valuation of pearls

Extremely rare first edition of this history of gemstones, corals and pearls, with plentiful references to the Arabian Gulf ("ou Mer d'Elcatif"), and specifically to Bahrain, Al-Qatif, Muscat, and Ormus, including separate chapters on pearls, their valuation, and the process of pearl-fishing. Carter lists Chappuzeau's work, which draws strongly on Tavernier, under the "key European accounts", quoting his mention of the Gulf as a major source of pearls: "The most significant pearl fishing ground is on the coast of Arabia Felix, between the towns of Julfar and Catif" (p. 94).

Chappuzeau's "text is in two parts, the first, of six chapters, describes gemstones beginning with diamond, then those of color, pearls, coral, amber yellow stones, the metals, ambergris, bezoar, indigo and other 'rich productions' of the East and West Indies, and including salts. The second part describes the places referred to in the first part, from Abyssinia to Visapur [...] Chappuzeau provides information on places in India where diamonds are found, how they are mined, and prices demanded for diamonds and other gemstones. The method of pricing pearls is also given along with a table of values [... This chapter] is famous for its perpetuation of the story that pearls generate from dew drops falling into the gaping shells of the pearl oysters" (Sinkankas). Also includes references to mining in Peru and trade from the West Indies and Americas.

Spine somewhat dust-soiled; interior shows some browning throughout. Provenance: Contemporary ink ownership "F. Baker" (?) to title-page. Latterly removed from the Library of the Birmingham Assay Office, one of the four assay offices in the United Kingdom, with their inconspicuous library stamp to the flyleaf. Vastly rarer than the 1671 English edition: no other copy seen in the trade. 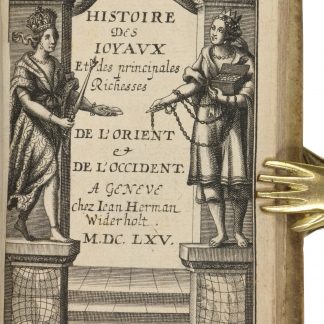