A humanist sammelband comprising two attractive, finely illustrated Venetian editions of key astrological works by the great Arab astronomer Abu Ma'shar, who furnished the West with Aristotelian thinking. These 12th-century Latin versions of Abu Ma'shar's immense introduction to astrology, "Kitab al-madkhal al-kabir 'ala 'ilm ahkam al-nujum" (translated by Hermann of Carintha), and of his book on planetary conjunctions, "Kitab al-qiranat" (translated by John of Seville; for both cf. GAL I, 221f.), were previously published only by Erhard Ratdolt at Augsburg in 1489. Both of Penzio's Venetian editions are rare; of the first, a single copy is known in the trade since 1952 (sold through us in 2017).

Of all the Arabic writers on astrology, the most imposing is Ja'far ibn Muhammad Abû Ma'shar (c. 787-886), known in the West as Albumasar. Born in Balkh (now Afghanistan), he travelled to Baghdad during the caliphate of al-Ma'mum (813-33) and there became the main rival of al-Kindi, the father of Arab philosophy, though principally he "devoted himself to the account and justification of astrology [...] He drew together into one great synthesis many ancient traditions Indian, Greek, and Iranian. The Greek influence consisted of the teachings of Plato, Aristotle, Ptolemy, and Theon. Yet he also drew on Syriac Neoplatonic sources and on al-Kindi for a general metaphysics" (Hackett, "Albumasar", in Gracia & Noone, eds., A Companion to Philosophy in the Middle Ages, p. 102). Abu Ma'shar was an important influence on such thinkers as Albert the Great and Roger Bacon, who commonly referred to him as the "auctor in astronomia", granting him the same status in astronomy that Aristotle enjoyed in philosophy.

Binding somewhat rubbed; extremities and spine professionally restored. From the library of the French theologian and scholar Nicolas Maillard (documented 1508-65), an admirer of Erasmus of Rotterdam, whom he knew and with whom he corresponded, with his autograph humanist ownership "Mallarii kai ton philon" at the top of the first title-page. 17th century ownership of the Barnabites of Annecy ("Collegii Annessiatensis congregationis Sancti Pauli") below the woodcut; a few 18th century bibliographical notes on the pastedowns. Later in the collection of Arthur Brölemann (1826-1904), bibliophile and president of the Tribunal de Commerce de Lyon, with his engraved bookplate on front pastedown. His library was dispersed by his great-granddaughter Blanche Bontoux (Mme. Étienne Mallet) in 1926. 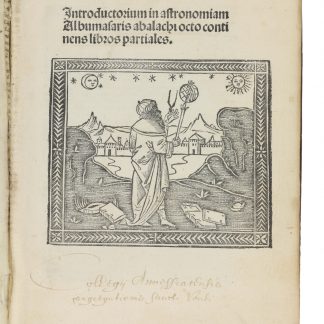