Professional repairs to hinges and corners; in all a fine copy. Provenance: Handwritten ownership of the Brussels jeweller Emanuel Meyer, dated 1788, to title-page. 19th century engraved bookplate of Thomas Westwood to pastedown. Latterly removed from the Library of the Birmingham Assay Office, one of the four assay offices in the United Kingdom, with their library stamp to the second flyleaf. 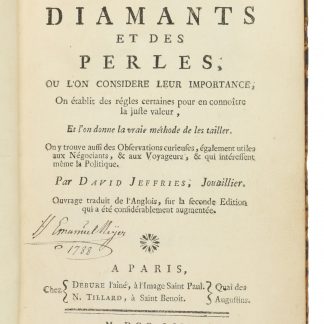