Two hand-drawn maps on a single sheet, made in the Ottoman Empire, likely in Istanbul, near the beginning of the 20th century. The map to the left depicts the Baghdad Vilayet, embracing Central Iraq. The map on the right features the Basra Vilayet, extending from Southern Iraq down the southern coast of the Arabian Gulf to include Kuwait, what is now the Dhahran area of Saudi Arabia, Bahrain, and Qatar. By the late 19th century the Gulf States had become de-facto British protectorates and were no longer practically subject to Ottoman rule; still, the Sublime Porte never relinquished its sovereignty.

Maps such as this, executed on thin tracing paper, were commonly made as educational tools at elite Ottoman schools and universities during the early 20th century, although few such specimens survive.

Clean and bright, with light creasing and traces of an old vertical centrefold. 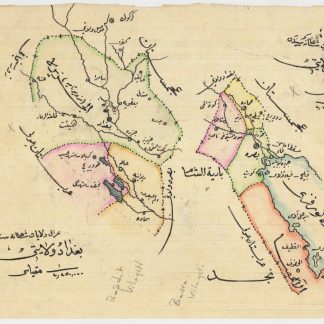