First impression of the second, much enlarged Dutch edition of Dapper's famous description of Africa. Olfert Dapper (1636-89) was celebrated by his contemporaries for his descriptions of faraway lands. He began his writing career with a description of Amsterdam, where he spent his whole life. His description of the entire continent of Africa and its islands was first published in 1668, which was still early in his career. It is now accepted as his best work and was translated into German and English in 1670, and into French in 1686. The present second edition was thoroughly revised.

Dapper's attention was drawn mainly to the Islamic North of Africa, and he gives extensive descriptions of the area between Morocco and Egypt (with a magnificent illustration of pyramids) and the Ethiopian Empire (Abyssinia). He maps the whole of Africa, Egypt and Ethiopia including the Arabian Peninsula as far as the Gulf and the Red Sea. He includes an impressive double-page plate with a view of a Hajj caravan from Cairo to Mecca.

Of special interest are the book's abundant, exact and finely executed illustrations - especially as they are here coloured by a contemporary hand, a highly unusual feature for this work. The illustrations include engraved maps of the states, provinces, and towns, engraved plates and a large number of engravings in the text representing the residents, the lesser-known plants and animals.

Dapper's interdisciplinary approach was innovative. He compiled his description of Africa from various sources, including unpublished Dutch reports and eye-witness accounts, most of them now lost or scarce, which lends this early work on Africa an enduring historical value. 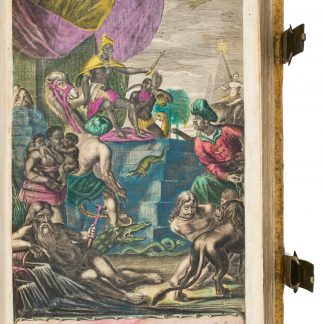