The editio princeps of the Bible in Osmanli

Well-preserved copy of the first complete edition of the Bible in Ottoman Turkish, printed in a vocalized Arabic typeface. Based on the manuscript of Ali Ufki Bey (Albert Bobovius), this version became the basis for further Turkish translations used by Armenian and Greek Christians. The New Testament had appeared separately in 1819. "In 1820 J. D. Kieffer [...] began a thorough revision of Ali Bey's translation of the Bible by comparing it with the original texts, as well as with the standard English, French, and German versions. He also collated it with W. Seaman's Nogai NT of 1666, with T. Erpenius' Arabic version, with H. Martyn's Persian version, with H. Brunton's Nogai NT of 1813, and with the London Polyglot. The translation of the NT was also carefully revised in view of the criticisms passed on the first edition. On crucial questions he had the advice of Baron Silvestre de Sacy. The complete Bible (without the Apocrypha) appeared in 1827, printed in Arabic character with full vocalization. The edition consisted of 5,000 copies of the Bible, and 2,000 copies of the NT issued separately" (Darlow/M.). 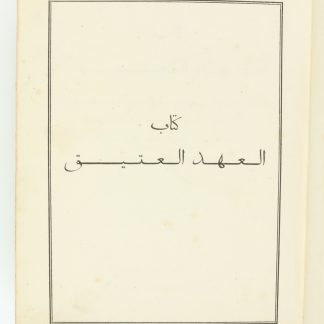