Intriguing pocket-size notebook used by Carco during his trip to Egypt in 1932, in the context of a report on drugs and narcotics, when he visited Alexandria and Cairo and met his second wife, Eliane Négrin. Filled with notes taken on the spot, as well as stories, mainly in pencil, it was used in the novel "Palace Égypte" (Albin Michel, 1933), and in the writing of the "Heures d'Égypte" (Avignon, 1940), a title Carco later set at the head of the first page in blue ink. The drawings and pencil sketches include a bust of Ramses, the head of King Tarraco, a slave, a throne, and goldsmith's work. Outlining his time in Egypt, Carco mentions Abbot Drioton, curator of the Cairo museum, describes his impressions of the Arabs, the conduct of the veiled women in the gardens of the Ezbekieh and in the street, as well as a conversation with an archaeologist, and provides atmospheric descriptions of landmarks, including Major Gayer-Anderson's house, and his first glimpse of the pyramids from his boat on the Nile, creating a mood of "soft harmony": "Pyramides fond d'or sur le sable rose puis orangées, safran renvoyant la lumière tout est hâlé, d'une harmonie altérée de douceur [...]". Some entries also speak of his dire financial situation and his excessive lifestyle: "My old man, my dear, I've got the money at Deauville, in a suitcase. Every day I take a bundle. Not good for money. The gulf is very good: the little hotel Normandie [...] Domestics. Always hunting and wysky. At home, radio, fridge and wysky. I don't talk to poor people. No good! Too much misery, always shopping. I hate to buy a hundred hats for two years and she refuses. Impossible to understand [...] More money, eh? Broke is ugly. OK I don't have the money. 'Drunk wallet, come here' [...]".

Includes quotations from Nerval, Baudelaire, Du Camp and others, as well as a list of writers, journalists, critics, etc. at the end, probably for the press service of "Heures d'Égypte".

A unique survival in excellent condition. 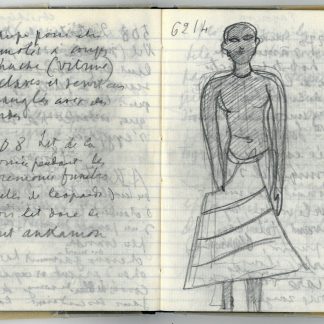