The history of armour throughout the ages

Folio (217 x 337 mm). German manuscript on paper. Pictorial watercolour title, (5) pp. of text, and 14 watercolour plates or arms and armour, each with German text mounted on verso. Interleaved with a calligraphic English translation and tissue guards.

Two striking series of highly decorative watercolours illustrating the history of armour throughout the ages. The first is purportedly copied after an earlier manuscript by the Augsburg artist G. P. Rugendas, dated 1714. The latter, with a date of 1688, is attributed to one "Matteo Argenteocorno" - a pseudonym for the goldsmith Matthäus Silberhorn from Ulm (cf. Thieme/Becker XXXI, p. 21), whose authorship is further established by his erased name on the final page of the first series: "Diversa objecta historialia, invenit & delineavit, & in argentam, vel aurichaleam caelavit [M. Silberhorn] a Ulmae [1841?]" (including a reference to an additional illustration not present here, showing the capture of Frederick the Fair at Mühldorf in 1322), and also by the loosely inserted watercolour bearing his initials "M.S." in ligature.

The series attributed to Rugendas shows armour from southern Germany, including a suit from the armoury at Lucerne, while four of the illustrations depict tournament armour. The Augsburg-based Rugendas was famed for his battle scenes, and while the style of the present watercolours is generally consistent with his popular drawings and prints, no original manuscript on which the present series might be based could be identified, and they are more probably original designs by Silberhorn, painting in the manner of an admired predecessor. The "Argenteocorno" manuscript depicts 13 cavalry ranks in uniforms of the War of the Spanish Succession (1701-14) set in landscapes, often with additional figures. It includes four medallion portraits of Eugene of Savoy, Maximilian Emmanuel of Bavaria, Frederick William of Brandenburg, and Alexander von Württemberg, surrounded by allegorical figures, military trophies, and battle scenes. 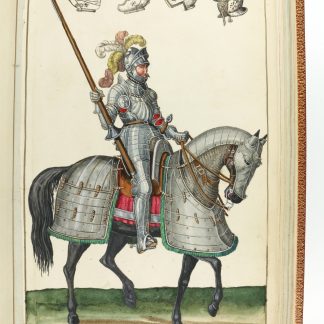