French translation of an essay on the Latin transcription of the Arabic alphabet by the renowned oriental scholar H. A. Barb, the first translator of the "Sharaf-nama". The slim work was published in German in 1860 as "Die Transcription des arabischen Alphabetes". Although no French translation of this work is known to have appeared in print, the corrections and annotations scattered throughout the manuscript suggest that it was either an effort by Barb himself - although at least two hands can be identified for the main text - or drawn up by his students and merely revised by Barb. Apart from the preface and chapters 1 and 2 as well as parts of chapters 3 and 4 of the "Transcription", it includes a 41-page section in Arabic script that does not appear in the German publication. While the corrections in the preface and the first two chapters are done in pencil, those found in chapters 3 and 4 are executed in red crayon, mainly numbering the examples in the German publication, here merely referenced by the scribe. The Arabic section (possibly in a third hand) shows several corrections in pencil as well as annotations in blue crayon, including several question marks.

Barb, a native of Galicia, served as the director of Vienna's Oriental Academy (now the Diplomatic Academy). He converted to Catholicism in 1884 while in his first year of law at the University of Vienna and rose in the Austrian civil service to the rank of Hofrat, a distinction rarely accorded to those of Jewish ancestry. As a scholar he received recognition both at home and abroad for his contributions towards the study of Persian and oriental languages. 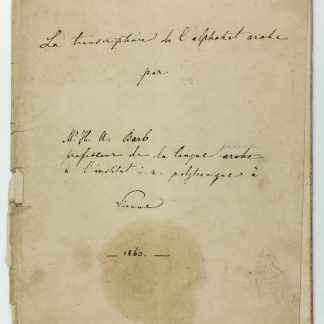