Executed by the French engraver and publisher Baltasar Moncornet (1600-68), the portrait shows Osman, the son of Sultan Ibrahim I, who was captured with his mother by the Maltese fleet in 1644 and educated by the Knights of Malta to become a Dominican friar. As an adolescent he was baptized and adopted the name Dominique de Saint-Thomas on 23 February 1656. He studied in Naples and Rome and went to Paris in 1664, where he spent two years. In 1667 he travelled to Candia on Crete, a Venetian-ruled city besieged by Ottoman forces since 1648, on an unsuccessful mission to convince the latter to make peace. Appointed vicar general on Malta around 1669, he returned to the island, where he spent his final years. 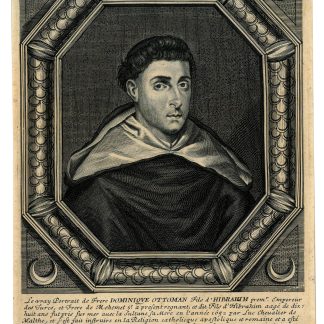