4to. 8, (2) pp. With additional panegyrical matter: 2 ff., 2 single sheets. All with woodcut initials and headpieces.

A set of French (and Latin) eulogies addressed to "Dominique Ottoman", or Osman, the son of Sultan Ibrahim I, who was captured with his mother by the Maltese fleet in 1644 and educated by the Knights of Malta to become a Dominican friar. As an adolescent he was baptized and adopted the name Dominique de Saint-Thomas on 23 February 1656. He studied in Naples and Rome and went to Paris in 1664, where he spent two years. In 1667 he travelled to Candia on Crete, a Venetian-ruled city besieged by Ottoman forces since 1648, on an unsuccessful mission to convince the latter to make peace. Appointed vicar general on Malta around 1669, he returned to the island, where he spent his final years.

Louis de Puch's formal address of 8 pages is followed by a 12-line madrigal on a separate leaf. This same madrigal is present as a broadside on another single sheet, as well as on the first of two conjoined additional leaves, the second of which contains a Latin elogy in praise of St. Dominicus (signed P[uch] L[odovicus]). Finally, a large quarto leaf (showing traces of folds) contains an unsigned French sonnet "Au serenissime prince Dominique Ottoman fils aisné du Sultan Ibrahim, religieux de l'Ordre de S. Dominique". 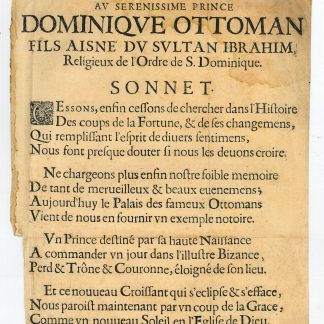