First edition. French translation of the "Vasiyetname", the Turkish catechism by the Hanafi Maturidi scholar and moralist Imam Birgivi (1522-73), who lived during the height of the Ottoman Empire. Edited by the French orientalist Garcin de Tassy (1794-1878). Invoking honesty, devotion, unity and fraternity, the "Vasiyetname" was directed at the common people, and was therefore written in Kaba Türkçe, a simpler, vulgar version of Ottoman Turkish used by unskilled workers and farmers.

Apart from the Muslim catechism, the present volume includes a translation of the "Pend-Namèh" by Saadi Shiraazi by the same editor, and a translation of the poem "Al-Burda" by Antoine-Isaac Silvestre de Sacy (1758-1838), as well as two fairy tales from the "Anwari Soheili", the famous collection of folk tales by Bidpai ("The Falconer" and "The Bear and the Gardener"). 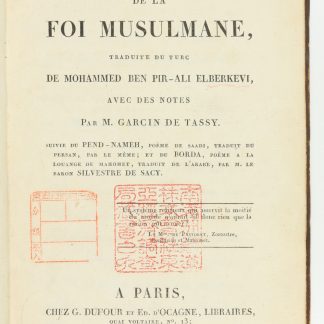