Draft of the "Weintz report", an important Nazi surveillance dossier on the activities of an illegal group of German legitimists, the so-called Harnier Circle, a term coined by the American historian James Donohoe in the 1960s. The group sought to restore the Wittelsbach family to rule in Bavaria from even before Hitler's rise to power in 1933 until Crown Prince Rupprecht's flight to Italy in December 1939. Based on material collected by the Gestapo, who investigated the group for several years and managed to infiltrate it since 1936, the report was prepared by Regierungsrat Weintz for the 1939 trials against the organisation. It contains profiles of prominent group members, including Adolf von Harnier (1903-45), Margarethe von Stengel (1898-1981), Heinrich Weiß (1887-1963), and Josef Zott (1901-45), and discusses issues such as Zott's relations with the German communist party, a plot againt Hitler's life (pp. 19f), and Weiß's flight to Austria in 1938 after an extramarital relationship became public (p. 91). The organisational structure and financial situation of the Harnier Circle are investigated, as are their clandestine meetings in cellars, inns, and private apartments, their efforts to recruit members and to advertise their cause through pamphlets, as well as their contacts with other political activists, including Catholic-legitimistic and separatist groups in Austria and Russia, as well as the also illegal German democratic movement. Interestingly enough, the paper describes the organisation's interactions with Crown Prince Rupprecht based on his own statement of 4 October 1939, emphasizing that Rupprecht was not at any point aware he was meeting with members of an illegal organisation. Also, it states that Adolf von Harnier had known for years that Rupprecht opposed any attempt to re-establish the monarchy, but failed to inform his comrades of his attitude, leading them to believe that Rupprecht agreed with their goals entirely (pp. 152f).

The Gestapo began arresting the activists on 4 August 1939, the number of detainees reaching 125 persons within only two weeks. The defendants were charged with preparing high treason, as well as with illegally producing and spreading written and visual material. Nine people were eventually punished, including Adolf von Harnier, who was sentenced to ten years in prison in June 1944, as well as Josef Zott, who received the death penalty in October of the same year and was executed on 15 January 1945.

The Weintz report is the most substantial contemporary source on the otherwise little-documented Harnier Circle, its extent largely surpassing the written defence by Adolf von Harnier, wherein he sought to minimize the importance of the organisation (5 May 1944).

Pages toned, minor edge wear, scattered creasing. Lacks the title-page, about 3 pages of the index, and the appendix. Among the paginated leaves, pages 113-123 are missing; 3 unpaginated leaves are inserted between 182 and 183, and another one between 128 and 129. The last part of the conclusion, discussing the impact the investigations had on the people, is incomplete. Some pencil annotations and emendations; a few passages stricken out with crayon; pencil note "R 3840" to first page.

The final report, comprising 219 pages, is kept at the Munich city archive (DE-1992-POL-1098). Donohoe mentions a privately owned 250-page copy at Prien am Chiemsee (Donohoe 130, note 91); another (possibly incomplete) copy is held at the archive for Christian-Democratic politics of the Konrad Adenauer foundation in Berlin (shelfmark: Müller, Wolfgang. 01-516: 013/1). 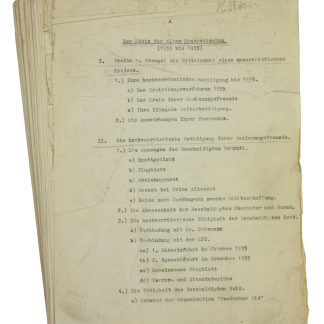