Early Tintin adventure set in the Middle East, signed by the author

Signed, illustrated (with a portrait of Tintin and Milou/Snowy) and inscribed by the artist on the verso of the front flyleaf to Denis Jamin for his birthday, dated 3 September 1971. The recipient was the grandson of the Belgian caricaturist Paul Jamin (1911-95), an old friend of Hergé's.

An early Tintin adventure, set in the Middle East, where the young reporter attempts to uncover a militant group responsible for sabotaging oil supplies. First published in album form in 1950. The story was originally set in Palestine under the British Mandate, but Hergé's publisher requested several alterations, and the setting was transferred to the fictional state of Khemed.

Extremeties a little bumped and chipped, internally an excellent copy. 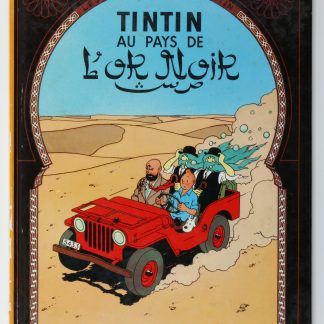