Certificate showing that Salahaddin Bey, auditor of the Hazine-i Hassa treasury (which managed the personal income and expenses of the Sultan), was awarded the Navy Aid Medal (in nickel) for his donation of 2024 Kurus to the Ottoman Naval Society.

As the Ottoman Empire dominated important waterways during the First World War, the government sought to strengthen its navy's defensive capabilities while fighting on many fronts on land. For this purpose, The Ottoman Naval Society was established. To finance the building of new ships, a campaign was initiated which was joined by many notables, including Sultan Mehmed Resad himself and state officials. The Navy Aid Medal was awarded to supporters who pledged a certain donation to the project, and the recipients' names were published in the press.

Meticulously calligraphed in black and gold ink. On the reverse are official attestations of authenticity. Folded with tears and a few chips to edges. Full transcription available. 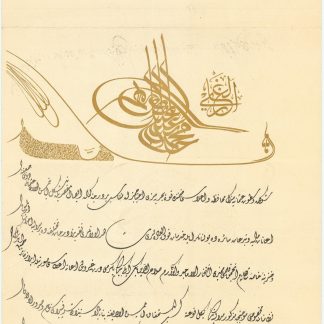