[Hydrographic Office]. Jabal at Tair to Perim Island. No. 143.

Detailed nautical chart of the Red Sea from Jabal al-Tair Island to the Strait of Bab-el-Mandeb, prepared by the British Admiralty. With an inset map of Khor Ghuleifakeh.

The chart pays particular attention to volcanic activity, labelling volcanic cones, lava hills, and active volcanos. It details islands in the Red Sea including Haleb, the Hanish Islands, and the Zubair Group, and includes warnings of strong currents as well as a note that the depths of the Red Sea were obtained via Echo Sounding. Labelled cities ashore include Mocca, Hodeida, and Loheiya on the Yemen coast, as well as Rehayto, Assab, and Baylul on the coast of Eritrea.

The British Admiralty has produced nautical charts since 1795 under the auspices of the United Kingdom Hydrographic Office (HO). Its main task was to provide the Royal Navy with navigational products and service, but since 1821 it has also sold charts to the public. The present chart was compiled from information in the Hydrographic Department to 1930; a prior version appeared as early as 1882. 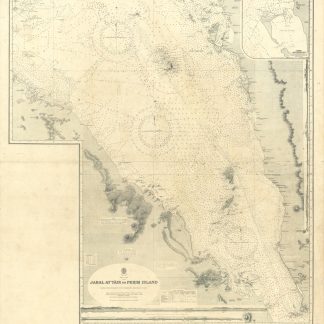