Nautical chart of the Gulf of Suez from Suez southward to Ras el Ghubah on the African coast and Kad-el Towila on the Arabian coast, prepared by the British Admiralty. With small views of the light beacons on Kal ah Kebireh Shoal and Newport Rock lighthouse.

The chart shows the city of Suez, labelling hospitals, railway stations, cemeteries, the water works, and a mosque, as well as the maritime canal, Port Ibrahim and Port Thewfik. Other details include the plain of Atakah and the fresh water conduit from Atakah to Suez, the plains of Mohaggiara, and Oyun Musa, marked "the traditionary well of Moses".

The British Admiralty has produced nautical charts since 1795 under the auspices of the United Kingdom Hydrographic Office (HO). Its main task was to provide the Royal Navy with navigational products and service, but since 1821 it has also sold charts to the public. The present chart was composed after Admiralty surveys of 1870, and saw corrections following a 1927 survey carried out by the Suez Canal Company; it was first published in 1871 and saw several corrections up to 1931.

With a single fold. A few manuscript notes. With a stamp "Increase 50%" near lower right corner. Captioned in print and in a former collector's hand on verso. Small marginal tears in the centrefold; not touching image. 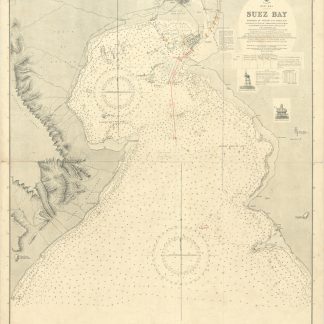