Appointment of the French Consul to Cairo in Ottoman Egypt

542 x 772 mm. Ottoman Turkish manuscript with large Tughra of Sultan Abdülmecid I (reigned 1839-1861). 1 page. Diwani calligraphy in black ink, powdered with gold, on a single sheet of sturdy, smoothed laid paper. Two watermarks: a crescent moon with a human face, and an eagle with outstretched wings and mark GFA.

An important document of Ottoman-French and Franco-Egyption relations: a firman (official letter) from Sultan Abdülmecid to the Kadi of Egypt concerning the appointment of Joseph Vattier de Bourville (1812-54) as the new French consul in Cairo. Sultan Abdulmejid informs the Kadi that, as requested by the French Ambassador to the Porte, Admiral Albin Roussin (1781-1854), Vattier de Bourville has been appointed to fill the place of Ferdinand de Lesseps as consul in Cairo and gives instructions that these orders are strictly to be obeyed and that nobody else is to be approved in the office of consul. The firman refers to the "Ahidname" (treaty) between France and the Ottoman Empire. Interestingly, the King of France, Louis Philippe I, is referred to as "Padishah (Sultan) of France", while the resident French ambassador in Istanbul is addressed as the "Commander of the Messianic Nation".

Three horizontal and vertical folds; some creases. Very light foxing with a small hole and trace of worming. Full transcription available upon request. 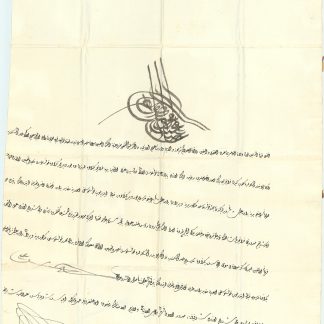