Orme, Robert. Historical fragments of the Mogul empire, of the Morattoes, and of the English concerns in Indostan; from the year MDCLIX, origin of the [...] company's trade at Broach and Surat, and a general idea of the government and people of Indostan.

Second, enlarged edition (first published in 1782). Newly added in this edition are an account of the "origin of the English establishment and of the East India Company’s trade at Broach and Surat", "A General Idea of the Government and People of Indostan", which Orme began writing in 1752, and an account of the life and writings of the author. Much of Orme’s life was spent in the employ of the East India Company, as a writer, a member of the council at Madras, commissary and accountant-general, and later as historiographer. 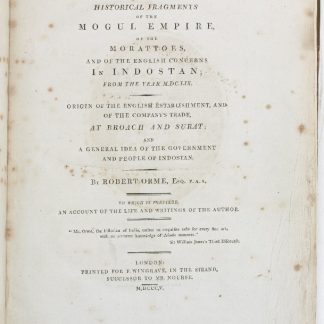