Extremely rare French edition of the "Kitab al-Jawami", an Arabic work on the interpretation of dreams by an "Achmet, son of Seirim" - almost certainly identical with the 8th century Muslim mystic Abu Bakr Muhammad ibn Sirin. The work survived in a Greek translation ("Biblion oneirokritikon") prepared in the 12th century. This is the French translation of Leunclavius's Latin edition, published by Wechel at Frankfurt in 1577: Leunclavius had erroneously attributed the work to "Apomazar" (Albumasar, i.e. Ga`far Abu Ma`sar al-Balhi), which mistake he later acknowledged, though it is repeated by the present edition. "The author Ahmed served as interpreter of dreams to Caliph Al-Mamun around 820 [...] The mediaeval conflation of medicine with astrology originated with the Arabs. Through the Salernitanian school, which had many Arabic works translated, the notion reached Europe in the 11th century, where it remained predominant as late as the 17th and 18th century [...] In 1577 J. Loewenklau published a Latin translation of the Oneirokritiká of Ahmed, whom he calls Apomasar" (cf. Schöll).

Some waterstains and edge flaws, especially to the first and last leaves. 17th c. handwritten ownership of the Discalced Carmelites of Bordeaux on title page; a few old annotations in ink. Several small defects to the vellum binding have been repaired. While the 1577 Latin edition (which Caillet calls "rarissime") has been auctioned three times since 1959, no copy of the present French edition is known in auction records internationally. 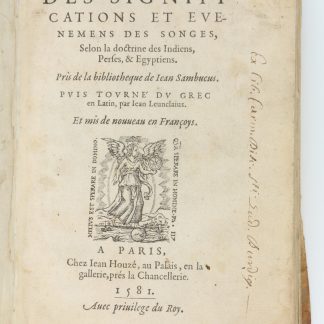