Medical work based on Pliny the Elder, Galen and Dioscorides, together with three other texts. From the library of the Russian tsars

Folio. (12), 125, (1) ff. With woodcut printer's device on title-page, repeated on final page, two pages with decorative woodcut borders (built up from 4 blocks, some with initials I.F.), and woodcut initials throughout. 18th-century half calf, with marbled paper in a tree pattern on sides, gold-tooled spine with the coat of arms of the Russian Tsars.

First edition of a collection of four medical works, compiled by the Swiss physician Albanus Torinus (1489-1550). The main part of the work consists of "De re medica", also known as "Medicina Pliniana", a very popular medical text during the Middle Ages. Compiled in the fourth century by an anonymous author, it is generally ascribed to Plinius Valerianus, also called pseudo-Plinius, since it mainly derived from Pliny the Elder's "Historia naturalis". Consisting of five books, it gives various medicines and treatments for different diseases, ailments, wounds, tumours etc. The book also draws heavily from the works of Galen and Dioscorides, all highly esteemed in the Arabic world.

The work also contains three other medical works from different authors. "The contents are all either spurious works or later compilations from genuine works of the authors to whom they are attributed" (Durling). It starts with an introduction to "the art of healing", ascribed to Soranus of Ephesus. The second text is by Oribasius, a Greek medical writer from the fourth century BC. According to Durling, the text is an extract from the first chapter of his "Euporista ad Eunapium". The work closes with a botanical text, "De virtutibus herbarum", ascribed to Lucius Apuleius Madaurensis, but written by an anonymous author from the 4th century, known as Pseudo-Apuleius. In one of the manuscripts Torinus used, the text was ascribed to the famous Italian physician Antonio Musa Brassavola (1500-55), an expert on the works of Galen and heavily influenced by his work.

The editor, Torinus, was appointed professor of practical medicine at the University of Basel after receiving the degree of doctor in medicine in Montpellier. He translated many Greek texts into Latin, or Latin works into the vernacular, including Vesalius' "De humani corporis fabrica".

From the library of the Russian tsars, with its letterpress library label with shelf number on pastedown and the coat of arms on the spine. With the place and date of printing added in manuscript on the title-page. Paper on boards slightly chafed, binding with traces of use along the extremities, corners bumped and spine restored. First five leaves with a minor water stain, but otherwise a very good copy. 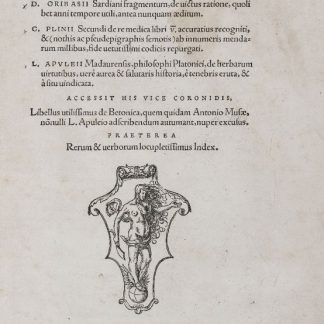