First issue under this title, previously released as "Expositio in primam fen quarti canonis Avicennae" (1506). A commentary (with the text, in the version of Gerardus Cremonensis) of book four, part (fen) one of Avicenna's systematic "Canon of Medicine", written in Arabic but widely translated throughout the Middle Ages and the basis of medical training in the West as late as the mid-17th century. It continues in use to this day in parts of the Arab world. Through this encyclopedic work, the author exerted "perhaps a wider influence in the eastern and western hemispheres than any other Islamic thinker" (PMM). "The 'Qanun' [...] contains some of the most illuminating thoughts pertaining to distinction of mediastinitis from pleurisy; contagious nature of phthisis; distribution of diseases by water and soil; careful description of skin troubles; of sexual diseases and perversions; of nervous ailments" (Sarton, Introduction to the History of Science). The present part is dedicated to a discussion of feverish illnesses. - 18th century ownership "Manhem" on title page. Some brownstaining throughout, as common; some waterstains near end; occasional inkstains and marginal annotations. An untrimmed, comparatively wide-margined copy. 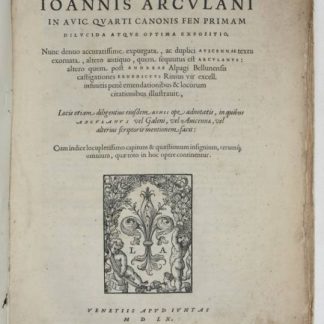