A remarkable collection of photographs showing China during the 1910s, the vast majority captioned in English. They include Shanghai, the Yangtze River, life outside Shanghai, Hong Kong, the River Canton, the canal between Shameen and Canton City, Canton, the five-storey pagodas and graveyards outside the Canton walls, Cheefo, Wei-hai-Wei, old Taku Forts and junks on the Pei-ho River, Changli station, Pei-tai-ho, Chien-Meng gate in Beijing, Chien-Men, the wall of Beijing, shelter for man guarding crops, kiaolang and soya crop near Beijing, the Beijing bell tower, the Race Club, yew trees, Temple of Heaven, the Pagoda at Yu-Chuan-Shan near Beijing, the Terracotta Pagoda and hills east of Beijing, the hills west of Yu Chuan-Pu, camel-back bridge in the gardens of Ya Choan-Shan, temples and lake in the summer palace, the Lama Temple courtyard in Beijing, the Pond Summer Palace, the Marble Bridge Summer Palace, looking up beginning of Pass Kalgar, foot of pass: carts and bullocks, the great wall on hills, camels waiting to be loaded at foot of pass, the riverbed forming a road; ascending the Nantow Pass, Messrs. Brisker, Hawkshaw and Horsely with the Lama Temple in the background, a view from the train near Kalgar, Men-Tou-Kou, a coal mine near Beijing, the Shan-Hai-Kwan hills, junks, fishing boats, a bluff seen from the harbour, Chinwantao, the old walled town on way to Hot Springs, the Great Wall of China at Shan-Hai-Twam, a steamer going down the river, a pontoon bridge to a Russian concession, Peizus waiting on tee to take passengers down the river, gardens, the Tientsin Club and station, the Tientsin Golf course, a fire at Liddell Bros., British soldiers leaving Tientsin for Tsingtau, international manoeuvres at Tientsin (spring 1914) showing Russian, British, French, Japanese, German troops, an icebreaker at Tientsin, the river near Canton, inside the Forbidden City of Beijing, Tai-Ho-Tien Forbidden City, a grotto temple near Shan-hai-Kwan, 13 photographs of Japan, a dam in the course of construction (Li-Shu-Shcen), the Regent Emperor (12th July 1917), Manchu troops in Beijing, the funeral of Yuan Shih-Kai in 1916, northern troops outside Tung Hua, Chang Siens soldiers, a flooded Chinese city, as well as eight photographs of Russia. 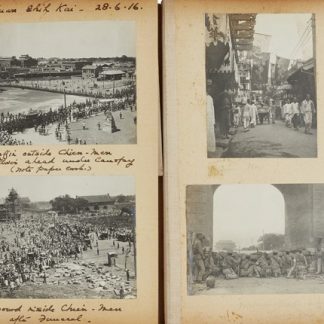